summer 2022-23 in football transfer As the period ended as of yesterday, the eyes were again on the 4 big ones. Besiktas, Fenerbahce, Galatasaray and Trabzonspor While their clubs made deals with a total of 49 players, they added surprise names to their squads. Especially Besiktas‘s Dele Alli and Galatasaray’s Mauro Icardi transfers made a worldwide impact…

BESIKTASGETS FROM THE PREMIER LEAGUE

It was a great surprise for the whole world that Beşiktaş, which bought 12 players, tied Dele Alli to their colors on loan. Another important note of this period in Kartal was that 6 of the 11 players who joined the squad came from the English Premier League (Cenk Tosun, Weghorst, Saiss, Dele Alli, Redmond, Masuaku).

Fenerbahce focused on Brazilian and Portuguese players in the transfer at the request of Jorge Jesus. While the yellow navy blue team made 4 reinforcements to the striker position, the surprise name was Michy Batshuayi, who played for Beşiktaş on loan last season. Fenerbahçe is also the only club among the big 4 to transfer a goalkeeper. GALATASARAY GOES TO THE MIDDLE FIELD

Galatasaray signed 5 players on the last day of the transfer. While PSG’s Mauro Icardi was the flashiest name of this period, Juan Mata, who played in Manchester United for 9 seasons, was also included in the squad as a last-minute surprise. Galatasaray made 6 of 13 transfers to the midfield. 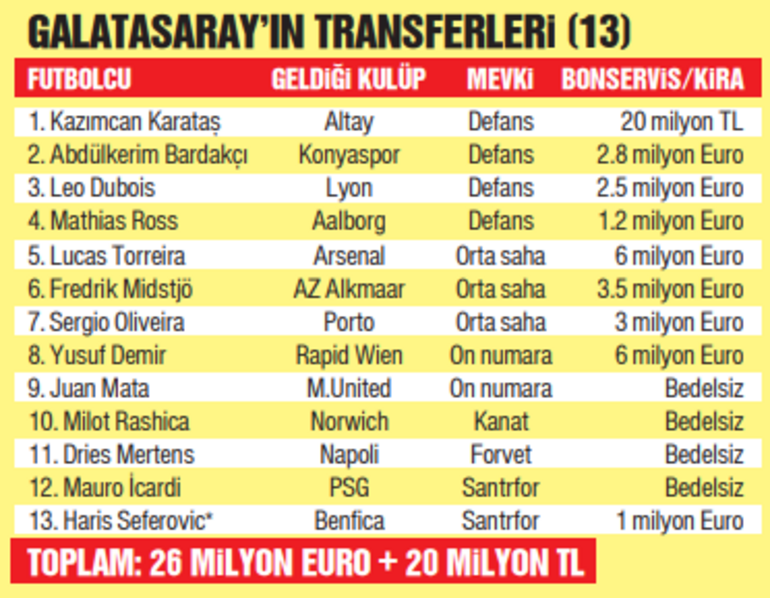 While Trabzonspor finished a significant part of the transfer early, they reinforced their striker position with Maxi Gomez and Umut Bozok as Cornelius went to Copenhagen. The surprise of this transfer period in the burgundy blues was that former football player Yusuf Yazıcı returned to the team on loan.