Prime Minister of Pakistan, one of the hottest photos during the Shanghai Cooperation Organization (SCO) Summit hosted by Uzbekistan Shahbaz SharifThe square where ‘ is located became the subject of ridicule in his country.

Sharing ‘all eyes on’

Via the official Twitter account of the Government of Pakistan, “All eyes are on Prime Minister Mohammad Shahbaz Sharif” Behind the scenes of the photo shared with the note broke the sharing records on Twitter. In the video, the leaders are seen passing by the stands with sweet treats and tasting. Attending the Summit at that time, the President Tayyip ErdoganPresident of Russia Vladimir Putin and Pakistani Prime Minister Sharif, who is seen to be behind the other leaders who attended the summit, is invited to the stand for a tasting.

The way that the photograph, taken while the Sharif is featured with his hand under his chin, is shared by the Pakistani Government account continues to be criticized. Pakistanis, with their comments under the photo, said that the government, “Stop exploiting Pakistani institutions with lies” they called.

The video in question under the post on the government’s official social media account “lies and truths” shared as On the other hand, the country’s opposition media also published the video with the same comments.

President Erdogan’s photo was also talked about a lot.

With the behind-the-scenes video of the photo of Pakistani Prime Minister Shahbaz Sharif coming to the agenda, President Erdogan’s SCO square, which was also talked about, became the focus of the same discussions.

While all the leaders who attended the summit were sitting side by side, the same discussions started in Turkey after the photo frame where President Erdoğan was sitting in the corner and was talking about something. With the photo and behind-the-scenes footage of Sharif coming to the fore, the same debates began to be discussed for Erdoğan as well. 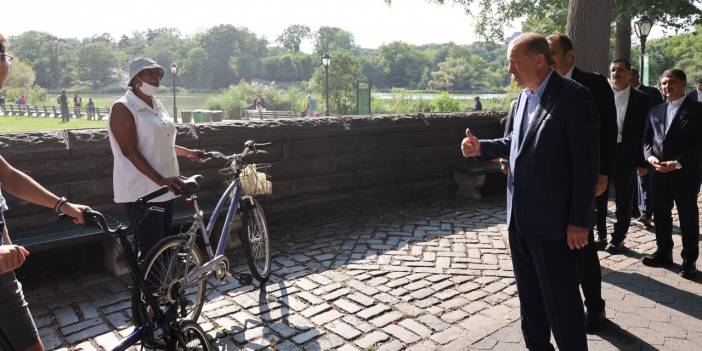 Warning from Erdogan in Central Park: Do not smoke