To us Altur TourismCan you tell the story of How did it start, how did it develop?

In 1972, I went to Germany with my late father. After working for four months, I said to my father in Germany, “I will return to Turkey, I will join the army”. I claimed that if I worked in Turkey as I did in Germany, I would earn money there too. Glad I made such a decision. I went back to Turkey and went to the army. I made 24 months. I saw a minibus advertisement in Rize in the newspaper. There was a minibus in Malatya Hekimhan. I went and bought that van. Because I bought my first car there, I love Malatya Hekimhan, Hekimhanlılar.

I started working on the Edirne Kapı-Habibler line in Istanbul with that minibus. At that time, after Kayabaşı, Şamlar, 500 Evler, we had the Sultançiftliği-Habipler line. We used to send a car from Edirnekapı every half hour. On Mondays and Fridays, we used to send one minibus to Kayabaşı and Şamlar only in the morning. Our citizens there used to make milk. Together with the copper cauldrons, they would fill a minibus, they would sell them in Edirnekapı, Karagümrük and Vefa, and we would take them back in the evening. Now Kayabaşı Şamlar has grown like a country. While continuing with that minibus, we took the second minibus. At that time, I worked until 12 at night to earn 500 lira every day. The next day, I would definitely take that money to the bank branch in Karagümrük. I would be the happiest person in the world when they would wait for me in the morning, deposit a coin and write it in my notebook. Continuing in this way, I increased the Habipler line to three minibuses. In fact, when my late father came on leave from Germany, he was shocked when I threw the notebook in the bank in front of him. Turkey’s stone land gold I said. “Son, you made a good decision, I’m glad you’re back,” he said.

You started with the minibus line, but at what point did your destiny change?

My relatives had pita bread parlors around our stop in Edirnekapı. While I was cleaning my car, a buffalo case Mercedes stopped next to me. Two gentlemen came out. One of them was the late Niyazi Adıgüzel and the other was Bedrettin Dalan… They said, “Will you give us factory service?” I said “I will”. They said, “Follow us.” The factory was in Haramidere. For us, a long journey is difficult because of the traffic. I will never forget, we went in front of the cemetery. This is the cemetery in Avcılar. I stood there. I said to my brother, “Close the doors, these guys are kidnapping us.” Bedrettin Bey came back, I opened the window… He said softly, “Why don’t you follow my son?” I said, “Brother, are you kidnapping us? Istanbul is over. It says Tekirdag, Edirne, I’m afraid,” I said. Whatever happened, happened there. There was an electrification, a friendly atmosphere between us. There was a Beko factory in Beylikdüzü, there was a return from there. We landed in Haramidere. A new factory is being built, I saw it, I was relieved. They laughed and said, “We’re kidnapping you” or something. We entered the room of the late Niyazi Bey at the factory. Paneled or something, I’ve never seen such a room before. All of a sudden, cakes and teas came to the table. I said, “My God must have given us birth on the night of power”. Meanwhile, he called the personnel manager. He said, “This friend of ours will carry our staff, talk and start.” We started to work there, the staff began to increase. “You,” they said, “also put a car from Eyüpsultan. You find the car, we’ll give you this much money, no matter how much you work for.” I put it and looked, it’s a good thing, I mean someone else is working and I’m making money. I liked it. Put it there, put it here, when the lines came back to back, the number of personnel there increased to 1,500. Our vehicle fleet has started to grow considerably. When I say one car, two cars, five cars… Bakırköy Municipality… I started to provide municipal services in Bakırköy, Bahçelievler, Esenler, Avcılar. Then I started at Tekel General Directorate. That fleet, which we started with a car, has now turned into a fleet of 14 thousand cars, thank God.

Well, now, of course, vehicles have a great importance in your life. You do not forget your first vehicle, you do not forget the place you bought it for the first time, but some brands are very important for you. You are almost collaborating with them, aren’t you?

That’s right… For example, when you buy a Mercedes car, you don’t have a problem, you don’t have any worries, you don’t have any thoughts. It doesn’t let you down. He works very hard to get you to your goal. We still haven’t hit the keys on the same type of cars and buses that we bought for Turkish Airlines’ shuttles in 2015, would you believe? Because they are such solid, safe, and good cars… Making these in our country is very important for our country’s economy. It is our chance, too. You know in the previous period; Mercedes’ 100 thousandth bus is Altur’s. Only the number of buses we bought with him was 24 this year. I think we will take this much higher in 2023. We want to keep our fleet young, because we are a growing company. There is always work coming to us.

We provide value to our country, our country’s economy, and we get two drivers for each car. Let there be 1000 drivers, let 1000 drivers start tomorrow. We openly declare that we only need a driver. We want a driver, we are waiting. To our new friends who will drive these new cars
we need. 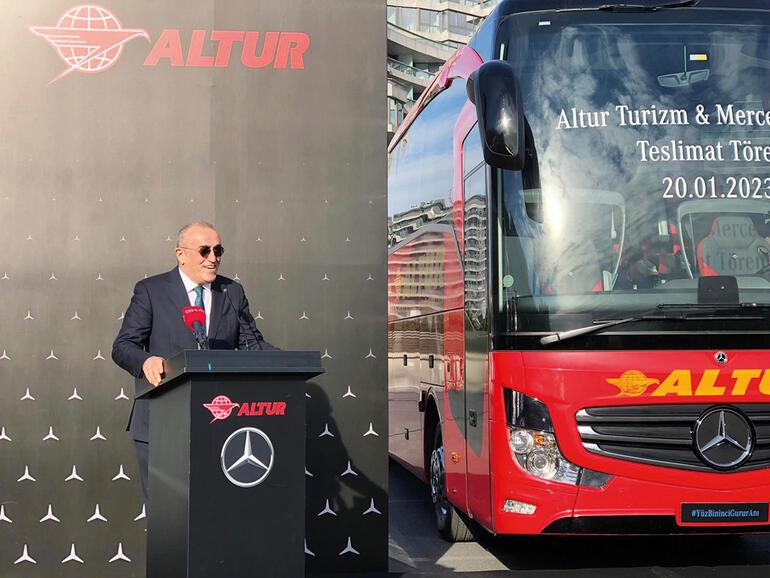 THE FEMALE DRIVER IS MORE CAREFUL

Does this increase in demand also create a need for new employment?

I want to say something emphatically here; We have a lot of female drivers working with us, but I would like to increase this. In terms of both discipline and safety, female drivers are much more careful.

We will be very happy if the majority of female drivers are there.

THERE WILL BE NEW PURCHASES IN 2023

What are your goals at Altur? At what point do you say “Yes, I reached my goal”?

We have 11 thousand employees including subcontractors. Our own Altur payroll staff is 4,000 people. We have approximately 700 shuttles and drivers at the Manisa Vestel factory. There are in Ankara, Tekirdağ, Çerkezköy and İzmir. We have many employees all over Turkey. Altur, inevitably, is growing every day. Imagine that every business adds one or two cars every day. Look here, I’m telling you because we have our own group last year. Since I am a Wolsvagen, Skoda and Seat dealer and I am very close friends with Ferit Bey, 150 of the 300 vehicles that will come to Turkey from the 16-seater vehicles have been given to us, gratefully. The vehicles that we will receive in the eighth month of last year have been postponed to the seventh month of this year. So it was delayed for a year. No cars come to Turkey. We have such a problem. By the way, I would like to thank companies such as Mercedes, Fiat, Ford, who supported us in these troubled times, in cars for 15-16 people. If we had not been able to obtain cars from them, we would have been in a really difficult situation. In other words, the sector is growing a lot, but there are very difficult situations in our sector. Now a friend came to me yesterday. “We have a factory in Urfa,” he says. “Altur needs to come to Urfa, he needs to do this,” he says. Now there is so much demand that we ourselves, our company is a brand. We have to give good service. We always keep our fleets two years old. We try not to use old cars. But vehicle When we can’t find it, we are in a very difficult situation. As Altur, we are actually far ahead of our goals. Still, we will have very serious purchases in 2023. Because there is a lot of demand for transport. We cannot answer many of them. In other words, we have come to the point where we say, “We are full this year, we can no longer get jobs”. By Allah’s leave, we will have other investments much further in 2023.