The woman who pushed a 3-year-old girl waiting for a train with her mother on the train tracks in the US state of Oregon was arrested by the court. The footage of the event has become one of the most talked about topics on social media today.

USAof Oregon An unbelievable event that took place in the state of America has found wide coverage in the American press today.

STOPPED THE LITTLE CHILD ON THE RAILS

When the brutal attack took place, a 3-year-old toddler girl was standing next to her mother on the platform.

While the mother and daughter were waiting for the train to arrive, a woman sitting behind them suddenly stood up and pushed the little boy forward. Standing just at the edge of the white warning line, the girl fell to the ground and then fell headlong off the platform onto the tracks.

Graphics:
On Dec. 28 at the Gateway Transit Center in Portland, OR, a person shoved a toddler face first into the train tracks. The suspect was apprehended. Antifa & far-left activists in the city have argued against police patrolling public transport, saying it endangers people. pic.twitter.com/H22zL6Zly5

The station froze as the 32-year-old stranger, whose name is known to be Brianna Lace Workman, calmly stepped back and sat down. After a short shock, people immediately took action to save the little girl from the tracks.

In the footage, it is seen that although the little girl hit her head on the rails after falling, she suddenly stood up and turned to the people who came to save herself.

As the eyewitnesses pulled the little boy up safely, the woman who pushed him onto the tracks calmly watched what was going on.

After the incident, the little boy was taken to the hospital. The child, who suffered from severe headache and had scars on his head, was reported to be in good health.

Multnomah County District Attorney Mike Schmidt announced in a statement that the attacker was arrested. The woman is on trial for first-degree assault, interference with public transportation, second-degree disorderly conduct and reckless endangerment of another person. 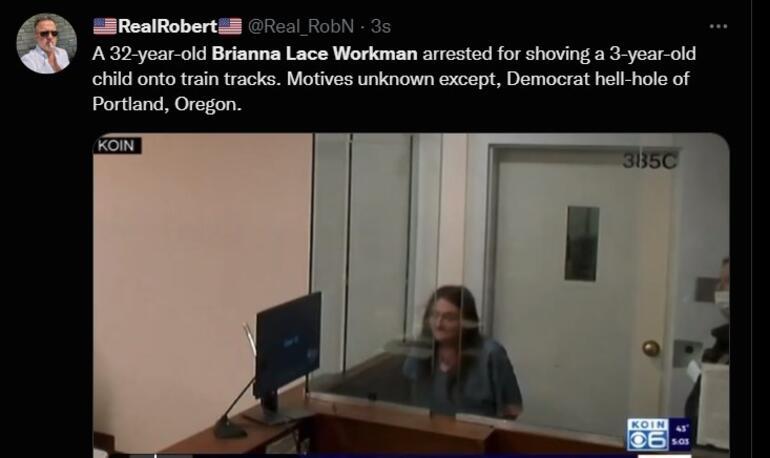