President Sakellaropoulou, who first went to the island of Herke (Halki) in the Eastern Aegean on September 11, opened the new academic year with a religious ceremony held here. Sakellaropoulou was given the title of “honorary citizen of the island”, while the Greek President praised the island’s “warrior” character. In his speech here, Sakellaropoulou said, “His people are the stronghold of Hellenism.” used the phrases.

Later, the Greek President, who went to the island of Rhodes, participated in the 4th International Law and International Politics Symposium held on the occasion of the 40th anniversary of the United Nations Convention on the Law of the Sea (UNCLOS) adopted in Montego Bay in 1982. While many presentations targeting Turkey were made within the scope of the symposium, some of the topics that attracted attention were as follows:

After the conference in Rhodes, the President of Greece, Katerina Sakellaropoulou, will first travel to the island of Meis (Kızılhisar). The Greek President, who will attend the “79th anniversary of the liberation of Meis” ceremony here, will then go to Fener Island. This visit by Sakellaropoulou carries more provocative messages than any other.

KARADA AND FENERY ISLAND DO NOT BELONG TO GREECE

Before everything; Fener Island and Karaada, just opposite Kaş, were never ceded to Greece.

The Dodecanese Islands and their associated islets in the Meis and Menteşe Islands region were ceded to Italy by counting their names in the Lausanne Peace Treaty. The other two independent islands in the region, Karaada and Fener, were not subject to sovereignty in Lausanne. On January 4, 1932, with the Turkish-Italian Agreement, the sovereignty of Karaada and Fener Island was transferred to Italy. The Italians, on the other hand, left the islands that Turkey ceded to them in Lausanne under the sovereignty of Greece with the 1947 Paris Peace Treaty. However, in this period, no reference was made to the Turkish-Italian Convention of 1932. In other words, the islands next to Meis were unlawfully transferred, with the unilateral enlargement of Lausanne, without the consent of Turkey, which was not among the contracting states of the Paris Peace Treaty. In addition, the “adjacent islets” of Meis mentioned in the Paris Peace Treaty were not specified concretely either in the text of the treaty or in the attached maps.

By including Karaada and Fener Island in the resettlement practice in November 1995, Greece is trying to create a de facto situation on these islands with some fait accomplis. Currently, Kaarada has a population of 15 and Fener Island has a population of 9. However, the Arbitration Case in the South China Sea shows the invalidity of Greece’s resettlement policy. In this case, the court interpreted the article 121/3 of UNCLOS and brought the conditions for a fully effective island to be “suitable for human habitation without external support and to have a unique economic life”. In the same decision, while determining the effect of the islands, it was emphasized that the state before the modernization would be essential. In other words, it has also been noted that the resettlement and establishment policies of Greece have no effect on the sea areas of the islands.

Maritime lawyers in Turkey underline that the claim of sovereignty over Karaada and Fener Island should be brought to the agenda. Because if these two islands remain under the sovereignty of Turkey, there will be no logical legal explanation to say that Meis could have any effect on the sharing of the Exclusive Economic Zone in the Eastern Mediterranean. Turkey’s claim to sovereignty over these islands is in all respects much stronger than that of Greece. Experts evaluate that Fener Island can be a model for other 153 EGAYDAAKs. 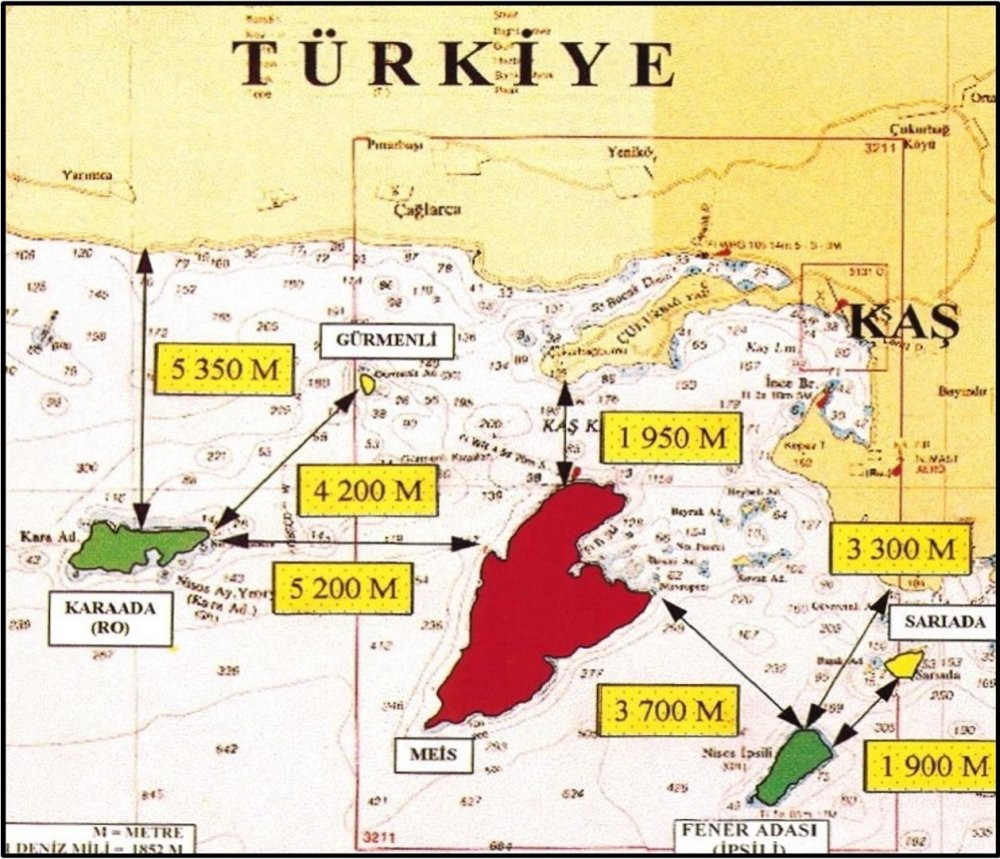 One of the notable presentations of the conference in Rhodes was titled “ICC’s regional jurisdiction in light of UNCLOS: Rereading Lotus”. Because the Bozkurt-Lotus case gives important rights in terms of responses to Greek aggression today.

The Bozkurt-Lotus case was the result of the collision between the Turkish steamer Bozkurt and the French steamship Lotus on 2 August 1926, in the offshore of Lesbos in the Sea of ​​Islands, and the death of 8 Turkish citizens, as a result of the death of 8 Turkish citizens, together with the captain of the French ship, Demons, in Istanbul. An international trial that began as a result of his arrest by

France objected to the arrest decision and claimed that Turkey did not have the authority to arrest the French captain. Thereupon, an application was made to the International Court of Justice in The Hague, and this case, in which Mahmut Esat, who would take the surname “Bozkurt” with the Surname Law of 1934, defended Turkey, resulted in the victory of the Turkish thesis.

One day, Atatürk and İnönü invited me to their presence. They ordered me to explain the matter again. I explained and finished my words as follows: “Pasha, let’s go to The Hague Court of Justice, let’s find out who is right. I’m sure about us. Let me defend our case. If I lose, I will not return to my hometown. But we will win. Besides, if we do what the French say without going before the Court of Justice, we will have yielded to the threats of the French State, and this will give them the courage to continue the same threats in other matters. However, if we go to The Hague Court, our honor and dignity will not be damaged even if we lose the case. Because obeying the judgment of an international court is not dishonorable, on the contrary, it is a great honor.”

Upon these words, Atatürk replied to me as follows: “Goodbye, you will win, even if you do not win, the country will embrace you.”

France, claiming that Turkey’s arrest is against international law, argued that only the state to which the ship is bound has the right to prosecute for crimes committed in the high seas. The Court of Justice concluded that this was not a mandatory and definite rule and stated that the Turkish State had the right to deal with the incident, since the effect of the crime was seen on the Turkish ship, and accepted that Turkey did not violate international law by prosecuting the French captain. This decision was referred to as the “Lotus Principle” or “Lotus Approach” in the literature and became a rule for all countries party to the convention in the 1958 “Geneva High Seas Convention” under the name of “the principle of freedom of the high seas”.