Prince Louis, who played a role from everyone during the 70th anniversary celebrations of Queen Elizabeth II, one of the longest reigning monarchs in the world, started her new life with her family.

THE FIRST DAY WAS IN THE CAMERAS
Attracting attention with her unsteady attitude in Platinum Jubile celebrations, in every event she attended with her family. Prince Louisspent the first day of the school where he would study with his other two siblings in front of the cameras.

WELCOME TO THE SCHOOL PRINCIPAL
The Duchess of Cambridge moved from London to Adelaide Cottage, close to Windsor Castle, to be closer to the Queen Kate Middleton with the Duke of Cambridge Prince Williamyesterday, he took his three children by the hand and took them to their new school. 9-year-old who will be studying in the same school Prince George7 year old Princess Charlotte and 4-year-old Prince Louis were greeted at the door by the school’s principal, Jonathan Perry, on the first day. 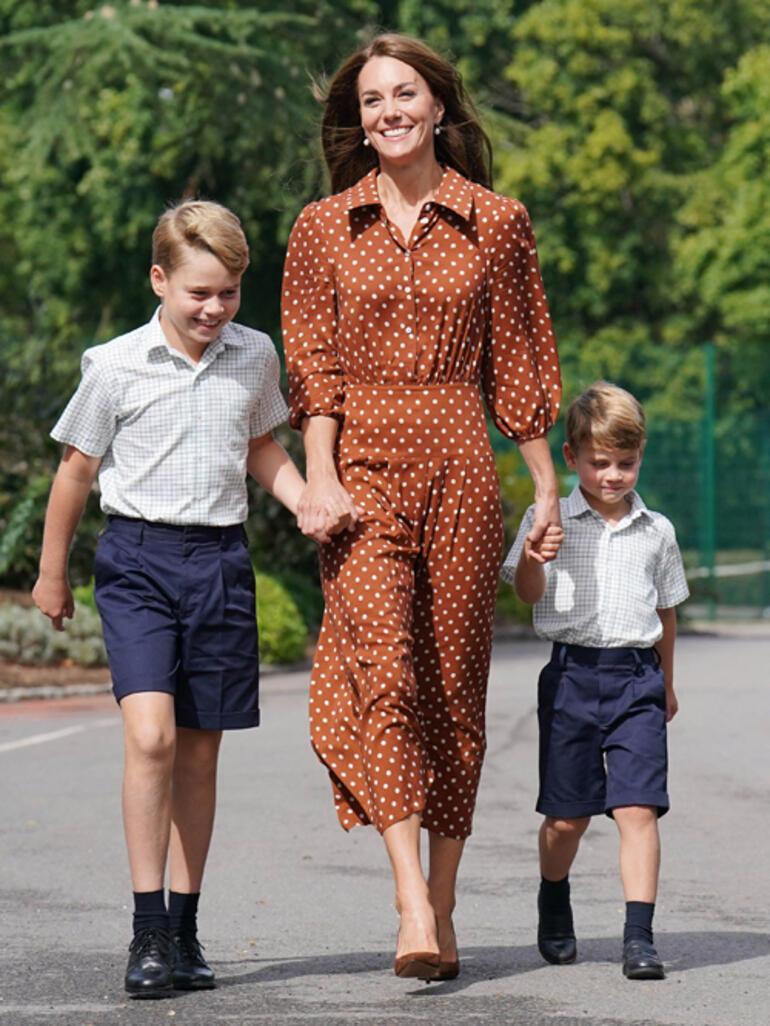 IT SHOWED ITSELF AGAIN
Louis, who was talked about with his attitude during the Platinum Jubilee celebrations and even bothered the Queen for a while, also drew attention on the first day of school. Cambridge children went with their mothers and fathers to Lambrook School where they will be educated. 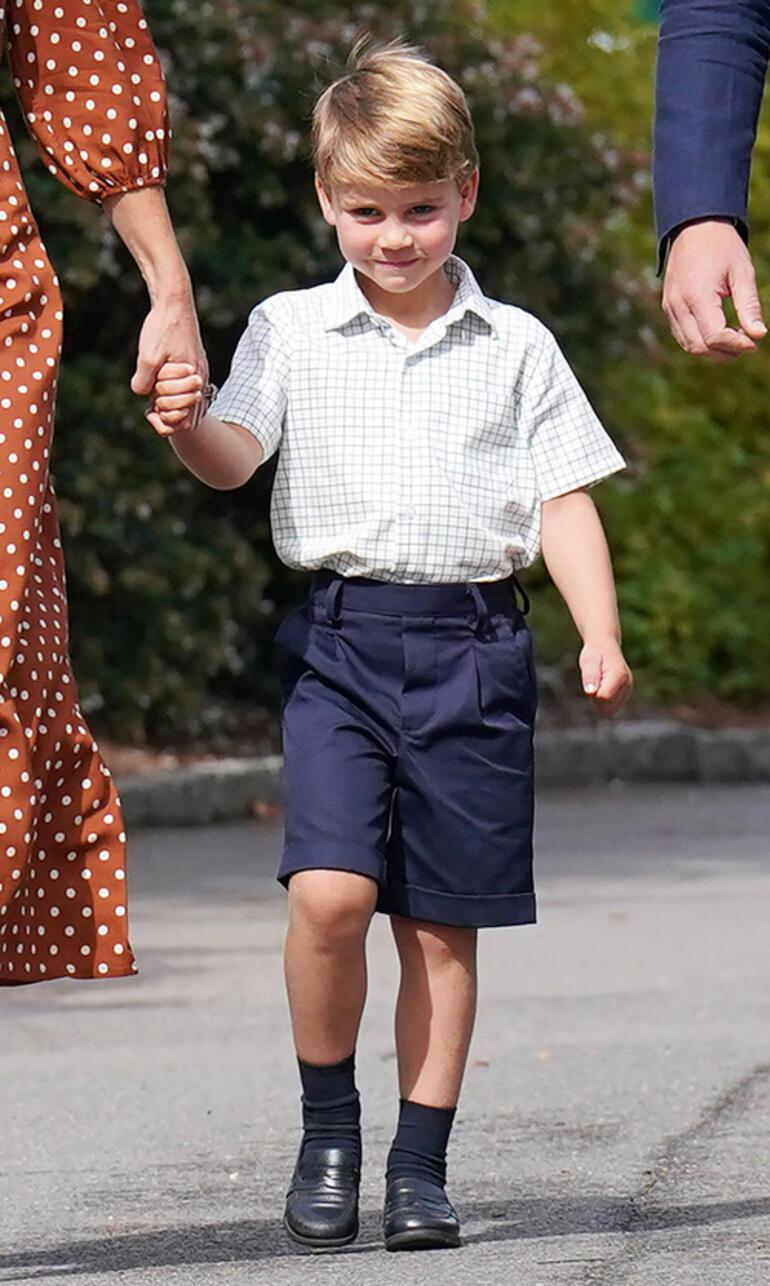 REJECTED TO HOLD WILLIAM’S HAND: ANNOUNCED INDEPENDENCE
Kate Middleton, wearing a white polka dot dress on brown, held the hand of her two sons, George and Louis. Prince William walked hand in hand with his daughter, Charlotte, in a checkered school uniform. At one point, William wanted to hold the other hand of his youngest son, Louis, who was walking right next to him. But Louis turned down his father’s request. This move of the Little Prince did not escape the cameras. Louis’ refusal of his father William’s request was interpreted as “declaring independence from day one”. 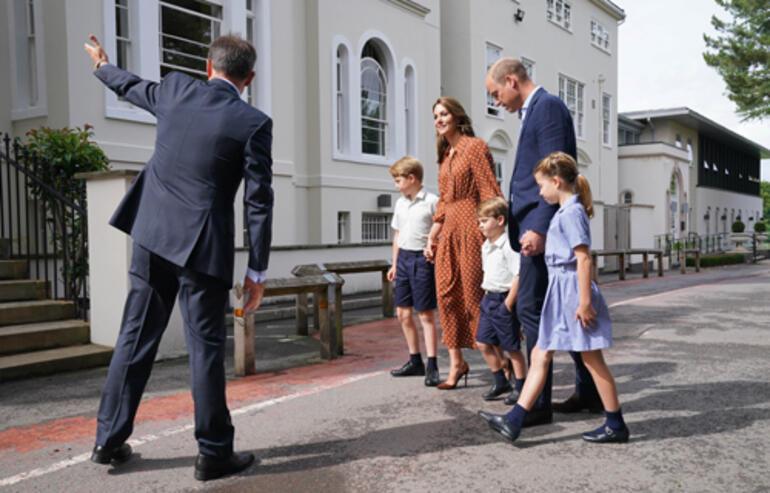 A NEW SCHOOL FOR ALL THREE
George, Charlotte and Louis had previously attended Thomas Battersea School in London. Their youngest brother, Louis, also attended daycare there. But the children’s school also changed when the family moved to Adelaide Cottage to be closer to Queen Elizabeth II. The three siblings will now attend Lambrook School in Berkshire. It is stated that the annual cost of this school is 15 thousand 556 pounds for a student.

OTHER CHILDREN’S FAMILIES ARE DANGEROUS: Kate and William’s three children will be attending the same school for the first time this school year. As a matter of fact, the families of the other children at the school were disturbed when this was heard. The news on this subject took place in the British press for a long time. According to the claims of these families, the fact that the three children of the British royal family were educated in the same place would also break the silence in the school. Parents, who claimed that the children’s bodyguards would constantly be around, argued that this would also create tension. 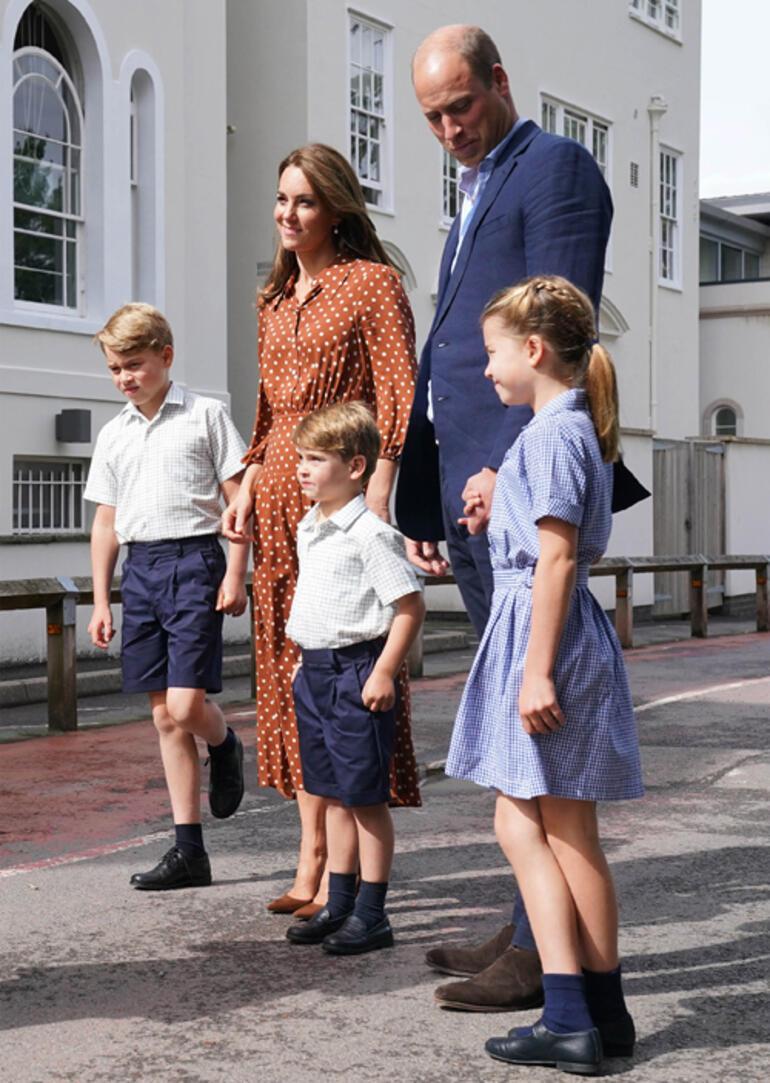 BRITISH BASSINI: MEGHAN’S CLAIMS DENIED
The fact that George, Charlotte and Louis went to the same school indirectly raised Meghan Markle once again. Markle, who moved to the USA with Prince Harry, claimed that if his son Archie had gone to school in London, he would be constantly followed by photographers. However, according to the British press, the Cambridge children’s first day at school denied Markle’s claim. Only three members of the press watched the couple on this first school day that Kate and William went with their children. A photographer, a cameraman, and a print media journalist served on George, Charlotte, and Louis’ first day of school.

HIGHLIGHTED THE PLATINUM JUBILE: Prince Louis, who started school with his elder brothers yesterday, even played a role from his great-grandmother at the Platinum Jubilee events held to celebrate the Queen’s 70th year on the throne last June. His restless attitude was the subject of the press for weeks and was talked about a lot. It even sparked some controversy. 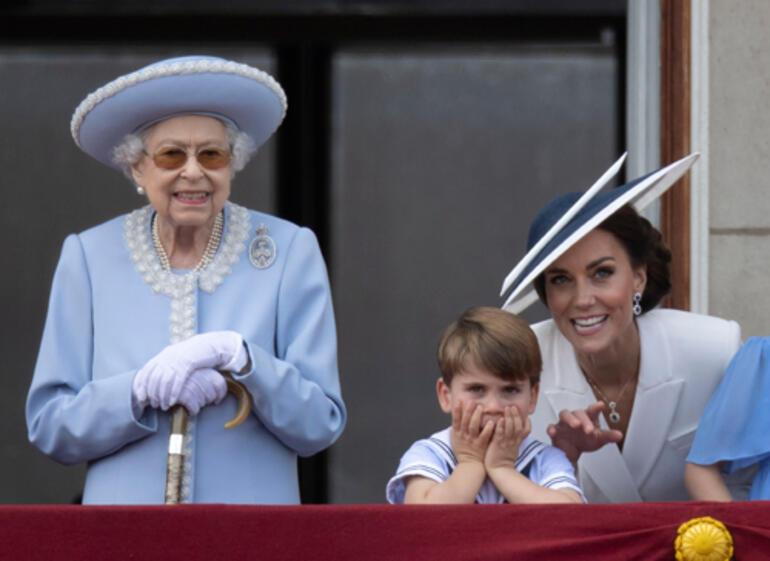 COMPARED TO ITS BIG BROTHERS
Louis was first compared to his older siblings, George and Charlotte. Their age-old demeanor at such events in the past was compared with Louise’s impudent behavior. 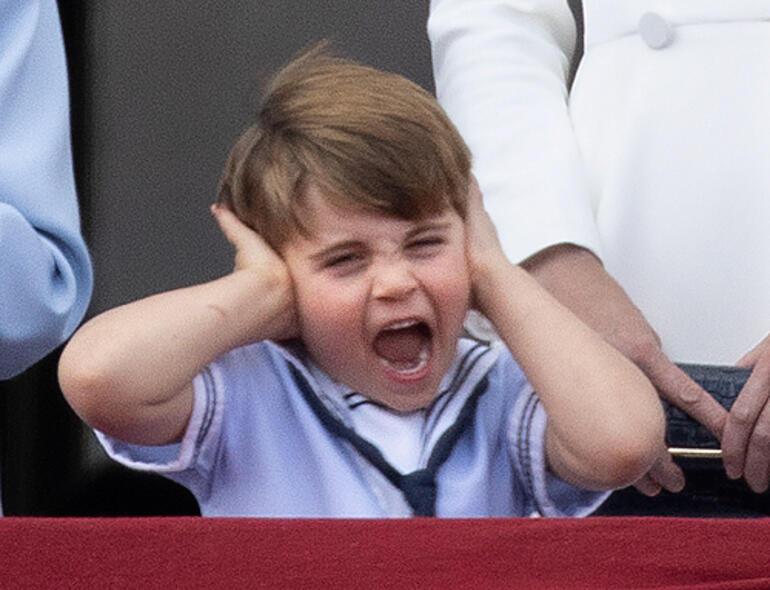 MOTHERS COMMENTED
Meanwhile, Kate Middleton, who is trying to calm her down in crowds because she is still young, has won the sympathy of millions of mothers who have children at a close age. Especially in crowded environments, mothers who had to fight a similar struggle with their children poured comments on the attitudes of Louis and Kate Middleton on social media. On Mumsnet, the meeting platform for mothers with young children, comments were made about Louis’ attitudes during the ceremonies. 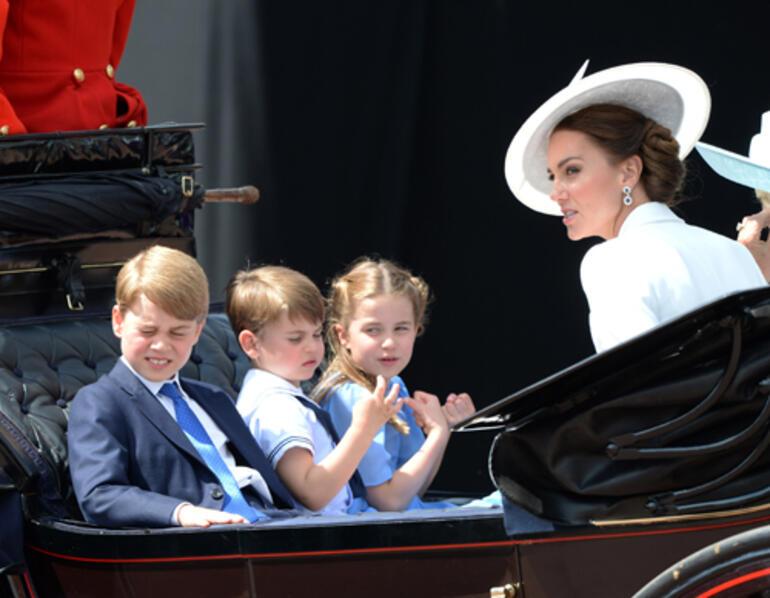 ‘I SPREAD COLD SWEATS’
Just like Louis, a mother with a 4-year-old wrote, “My child is like that too. Watching these made me feel less alone.” Another admitted, like Kate Middleton, that the very thought of trying to control her young child in a crowded crowd made her break out into a cold sweat. Another commented on it, writing, “Imagine your parenting skill being showcased to the world with a stubborn 4-year-old.” ‘VERY STANDARD BEHAVIOR’
Other mothers who had children close to Louis or who remember that period of their children stated that the little prince had to be in a certain spot for long hours and added that what he did was quite standard behavior. Another mother wrote: “I’m not surprised at her boredom and fidgety behavior. It’s a very long time and it’s hard for a four-year-old to sit still for hours.”

IT DID VERY WELL: “Kate coped very well with a 4-year-old,” some mothers wrote, noting that Louis’ older siblings George, 8, and Charlotte, 7, were doing well during the four-day celebrations. One mother even said, “After these four days, I think Kate can rest for a day without getting out of bed,” reminding how tired the Duchess must have been, the mother of three children. 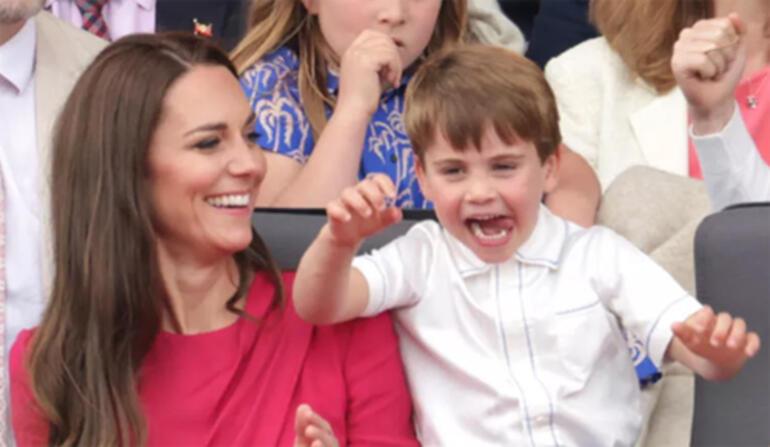 ‘THE INDICATOR OF APPROACH’
The fidgety attitude of the little prince Louis was also on the agenda on different social media platforms. A user stated that some people expect children to act like robots and mentioned that Louis covers his mother’s mouth with his hand. According to this user, many children behave like this and it is actually a sign of the closeness of Louis and his mother Kate. 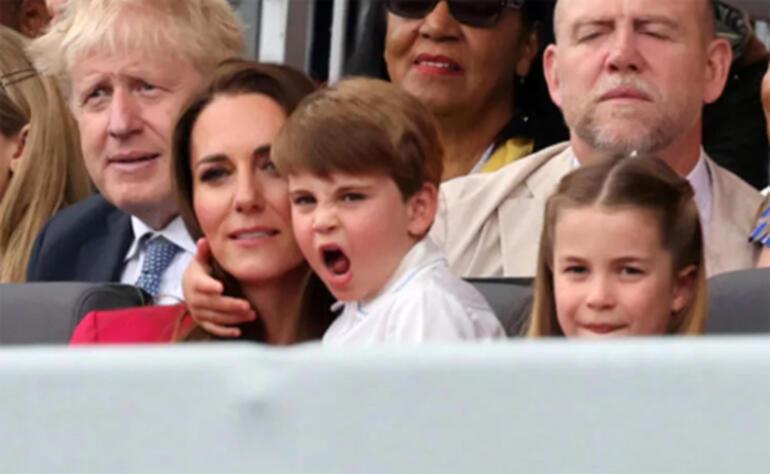 ‘A HISTORIC EVENT, OF course, IT WILL BE THERE’
Some people asked why such an active child, who is only 4 years old, was brought to the event. There were even those who argued that Louis should be left at home with his nanny. One respondent recalled that the Queen’s 70th year on the throne was an extraordinary occasion, writing, “This is a historic event and they were all supposed to be there. Even Louis. It’s an event that can only happen once in a person’s lifetime.” 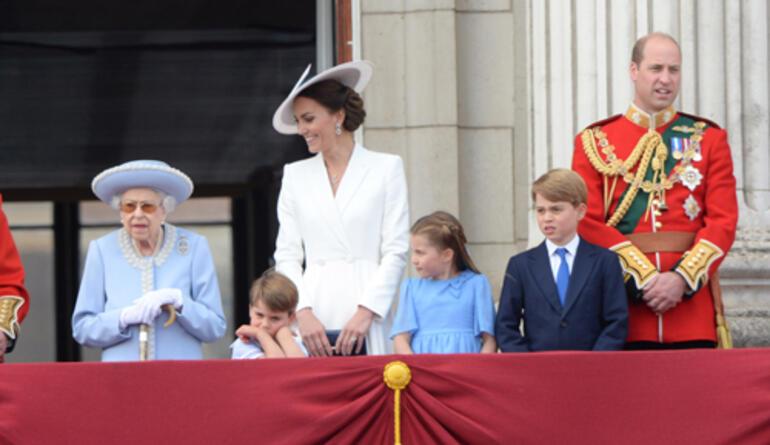 ‘I SHOULD YOU HAVE NO CHILD’
Meanwhile, some argued that Louis was a “spoiled” child. According to them, Louis, who is the youngest in the family, exhibits freer behavior than his older siblings. However, many people who defended this were opposed on social media platforms with “I guess you don’t have children” or similar answers.

THERE WERE LIKE HIS UNCLE: Some people compared Louis’ behavior to the behavior of his uncle Harry in similar environments when he was little. When Harry was a kid, his mother gave Diana a hard time at one of the Trooping the Colors events. Stinging his tongue at the cameras, Harry had also tried to pull the hair or clothes of his cousins ​​Beatrice and Eugenie, who were little kids like him. In those moments, too, Diana had worked hard to keep her young son under control. 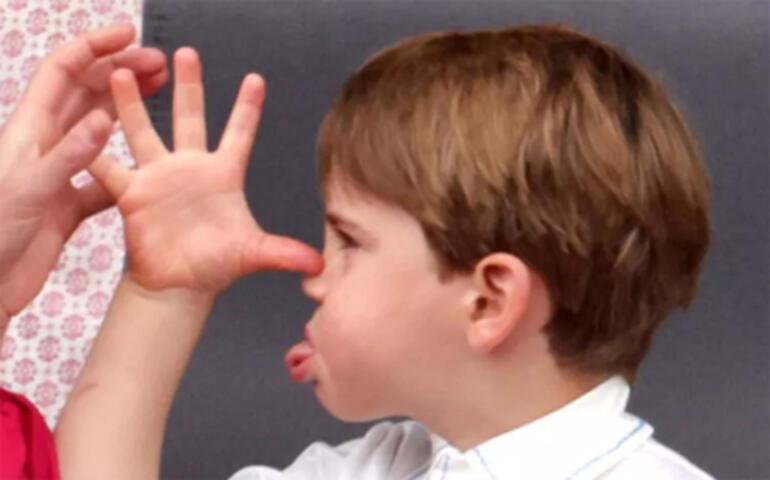 WHERE HE LEARNED IT WAS A MATTER OF CURIOUS
The most curious detail about Louis, who was raised by Maria Borrallo, who is known as a competent nanny, just like his older brother George and older sister Charlotte, was where he learned to be snippy and stick out his tongue. Considering the environment he grew up in, this was the most talked about and discussed detail about Louis.

PERFECTLY NORMAL ACCORDING TO THE EXPERT: Although some commentators on social media suggested that Louis may have an attention deficit and hyperactivity problem, family and marriage therapist Kaitlin Soule, speaking to the New York Post, said that little Louis’ behavior was quite normal for his age. Soule described Louis’ behavior as part of the celebrations as “completely normal and developmentally appropriate.” In the meantime, it is stated that Kate Middleton and Prince William prefer a more modern child-rearing style different from the traditional royal understanding, although they apply some rules. Spending their off-duty time with their children, the couple is raising their three children with just one nanny instead of a different one for each. 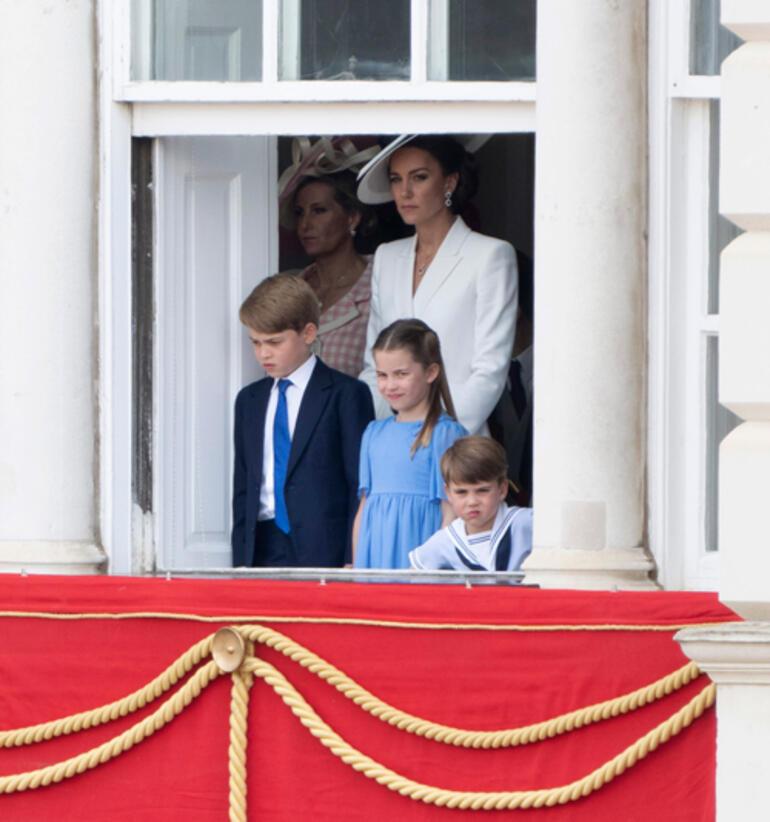 ALL GROWED IN FRONT OF THE CAMERAS
The three most prominent children of the British royal family have literally “grown up in front of the cameras.” They appeared before the press when they were just a few days old. Despite the “high walls” around them, their first steps, their first smiles and their international trips with their parents were always in front of the public. All this time, especially the eldest children of the family, George and Charlotte, did not reveal the “childish mischief” of their peers from time to time, except for a few small moments. In addition to being the eldest children of the family, their nannies also had a great influence on this.

NOW NAMI WILL LIVE IN HIS HOME: Kate and William will literally live a different life than before at Adelaide Cottage. The couple recently settled in Adelaide Cottage, which has an important place in the history of the royal family. According to the news from the family, the nanny of the three children will no longer live in the same house with them. Maria Teresa Turrion Borrallo, the Spanish nanny who takes care of the three children, will continue her duty. But instead of living with her Cambridge family, she will go home to her own home when her job is done.