Russian President Vladimir Putin, who announced that he would not attend the ceremony for Mikhail Gorbachev due to his busy schedule, said goodbye to Gorbachev, who died at the age of 91, in the hospital. Putin’s decision not to attend the ceremony drew attention in the Western media.

Last leader of the Union of Soviet Socialist Republics (USSR) Mikhail Gorbachev He died in the hospital where he was treated on August 30.

Farewell to GARBAÇOV IN HOSPITAL

Russian President Vladimir Putinsaid goodbye to Gorbachev, who died at the age of 91, in the hospital today.

The Russian leader, who went to the Moscow Central Clinical Hospital and carried out his last mission to Gorbachev, was photographed putting a bouquet of red roses in Gorbachev’s coffin.

Standing silently by the coffin for a few minutes, Putin lowered his head, touched the coffin and left the room after removing the cross.

PUTIN WILL NOT ATTEND THE CEREMONY

After the death of the last leader of the USSR, Mikhail Gorbachev, it was announced that the Russian leader would not attend the ceremony to be held on September 3.

Kremlin spokesman Peskov said in a statement on the subject. “Before his visit to Kaliningrad, Putin went to the Moscow Central Clinical Hospital to say goodbye to Gorbachev and put flowers on his body.” used the phrases.

Peskov drew attention to the intensity of Putin’s program. “Unfortunately the president’s work schedule didn’t allow him to do that on Saturday, so he decided to do it today” said. 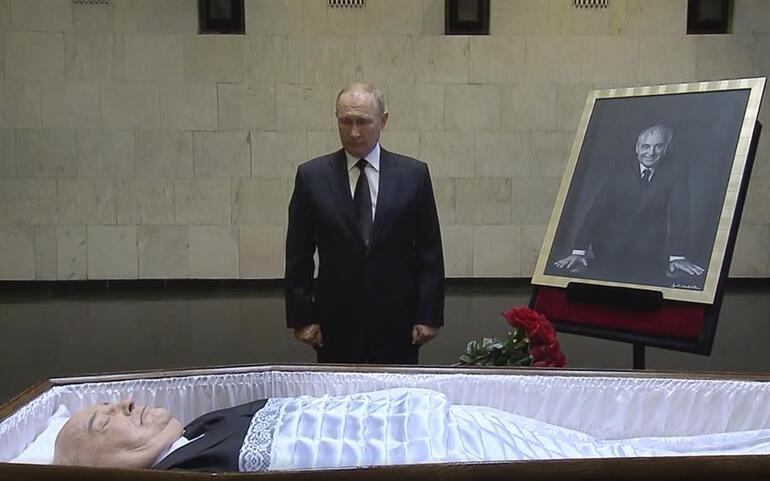 While staying away from the public farewell ceremony, Putin’s private visit to the hospital drew attention in the Western media. Newspapers claimed the visit reflected the Kremlin’s unease over Gorbachev’s legacy.

In his previous statements, Putin had criticized Gorbachev for his role in the disintegration of the Soviet Union.

The funeral of Mikhail Gorbachev will be held in Moscow on Saturday at the Trade Union House, where the funerals of high-ranking state officials are held. Gorbachev’s funeral will be held on the same day in the capital, Novodeichi Cemetery, next to the grave of his wife, Raisa, who died in 1999.

Continuing active politics after the establishment of the Russian Federation, Gorbachev participated in the 1996 presidential elections. Gorbachev, who could only come in 7th in the elections where 10 candidates competed, founded the Russian United Social Democratic Party in 2001. Gorbachev, who served as the party chairman until 2004, later took part in the organization of the political party. Gorbachev, who struggled with diseases in his last years, died on August 30, 2022 due to diseases related to the disease.