TEKNOFESTThey brought the technology they developed in the science competitions they participated in 4 years ago to the world market by incorporating them. Young engineers say that Turkey will have a say in this field in the future with the climate created in the work of unmanned underwater vehicles and robotics. Five young engineers, who won the first place in TEKNOFEST in 2018 with the team called Creatiny, which they founded at Karadeniz Technical University, went out into the world with the company they founded in 2020, called Degz. Here, young engineers, designers and business graduates, consisting of Kaan Öztürk, Kadir Yazıcı, Ahmet Sevim, Sena Dilber and Fatih Akbulut, produced the ‘Deringezen‘, they market over 50 mechanical and electronic parts they made while developing this vehicle to the world. Five young people told Hürriyet about their process from science competitions to commercialization as follows:

WE OPENED TO THE WORLD MARKET FROM TEKNOFEST

“We participated in science competitions at TEKNOFEST for the first time in 2018 with the team called Creatiny, which we formed at Black Sea Technical University. The unmanned underwater vehicle we developed was the first. We were first again in 2019 and third in 2020. It was difficult to do this job, especially to procure parts from abroad. We started to produce and develop every piece we had difficulty with ourselves. There were so many people and international companies that needed these parts. We looked good, we decided to commercialize it. In 2020, we established a company called Degz. We opened to the world market with the unmanned underwater robot called Deringezen we produced and the electronic and mechanical parts we produced while developing this robot. We don’t just sell our underwater vehicle, we also sell technology. It is a great pride for us where we are.

This is what is done in the world; Procuring ready-made sub-parts and imitating the previous ones, producing similar ones. But we developed our unmanned underwater vehicle with its sub-parts ourselves. Our new technology underwater robot Deringezen, which consists of all original designs, software and parts, has superior features than its similar examples in the world, after its latest developments. In these products, we have patented the critical sealed chamber used in underwater vehicles, we have four more electronic parts at the patent stage. For example, our camera is more advanced than any other model in the world with its 360-degree angle. In addition, an unlimited number of arms and devices can be attached, and it eliminates the user’s mistakes with its advanced power security features.”

“Our aim was to serve in waters where divers could not descend, and we succeeded,” said the entrepreneurs and said:

“We completed an advanced technology version last week for unsatisfied diver work. This version of Deringezen, which detects commands from the diver’s hand movement and acts autonomously according to these commands, is very special in the world. Our underwater robots, which have been sold so far, are used in search and rescue, scientific research, control of channels in dams, underwater mapping, the fish It is actively used in network controls on farms.”

Entrepreneurs pointed out that they have started to sell the high-tech sub-parts they designed and produced while developing the robot to many international companies working in the robotics sector all over the world, “These parts are currently in mass production. The world buys more than 50 parts from Turkey. Thanks to the competition, we achieved something, the most important thing. An ecosystem has formed in Turkey on unmanned underwater vehicles and robotic systems. The teams that produce unmanned underwater vehicles in Turkey are developing technology and contributing to localization by sharing their experiences. 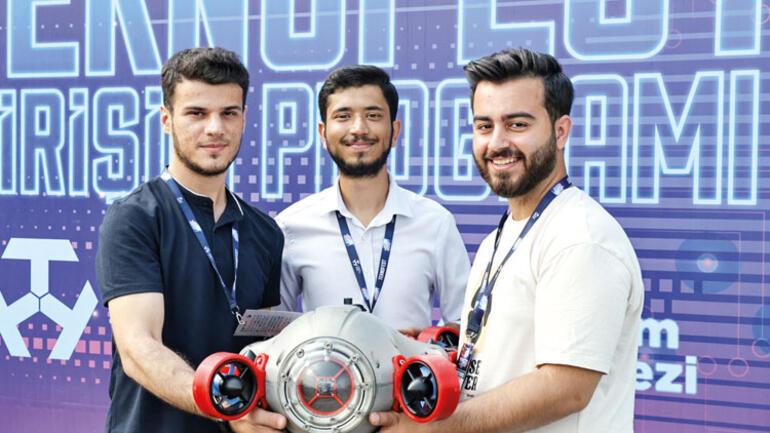 DOWN 600 METERS DEEP WITH ISU

6 young engineers who made it to the finals in the science competitions they participated in in 2019 and in TEKNOFEST in 2020 with the Anadolu Robotics team they established by coming together from different universities, became a company in 2020 with the support of KOSGEB. Anadolu Robotik, with the unmanned underwater vehicle they produced, went down to a depth of 600 meters and challenged its rivals in the world. Anadolu Robotik, which was established with the partnership of Ahmet Musab Yıldız, Fevzi Güneş, Yahya Koca, Muhammet Yılmaz, Furkan Dursun, Abdülbaki Koçer, continues its activities in the shipyard they established in Kayseri. They describe the Unmanned underwater vehicle ISU they produced as follows:

“We couldn’t get a degree in science competitions at TEKNOFEST. But our work in this area has found commercial value. The ISU can go to a depth of 600 meters, it is a monolithic vehicle made of aluminum, a vehicle in water. It can make every movement of an aircraft in the air and maintain its stance on every axis. This autonomous vehicle can lift up to 10 kilograms underwater. It can transfer images on water with thermal and full hd cameras. Currently, our products are used in fish farms, documentary filming and defense industry. We are making improvements for future use in autonomous underwater resources and autonomous seafloor exploration. On the one hand, we also carry out herd SIU studies. We are planning to produce this for security purposes in the defense industry. We aim to communicate these vehicles underwater wirelessly by 2028, which is currently not available in the world. And this vehicle we produce is more than 70 percent domestic.”