✔ Footsteps of the slowdown in the economy are heard more intensely. The worst performance of the last two years in the change in industrial production…

When every industrial production is announced, different evaluations are made based on the index, which is essentially the same. Nasreddin Hodja “You are right too” In fact, all of these assessments are correct.

It may seem strange, but when there is basically only one data, it is possible to measure more than one change about it. With these changes, different indicators can be obtained.

What matters is what you want to see. It is necessary to calculate accordingly.

TURKSTAT announced the realization of industrial production in July yesterday. It can be said that the production almost crashed in July, and it continued to increase… It is also possible to say that the decrease was very moderate…

The interesting thing is that all these assessments are correct. As I said, it depends on what purpose you’re doing the evaluation.

Suppose there is a single product within the scope of industrial production. A household appliance, for example a refrigerator… It is clear how many refrigerators we produced in July. There is no confusion in that. The difference in assessment begins when comparing refrigerator production in July with previous periods.

For example, we produced 100 refrigerators in July, we also have the production number of the same month of June and last year, we compare them, we see whether there is an increase or a decrease. Of course, we can easily find the exchange rates. This production tangible, visible, countable indicates a level.

The changes compared to the previous month and the previous year show the difference in the actual level of production.

If a football player has scored 10 goals, 1 in each of 10 matches, and another 10 goals, 2 in each of 5 matches, it is indisputable which of them will be considered more successful.

In industrial production, it is necessary to look at the number of days. The same working day is not worked every month. Especially if the number of working days has decreased rapidly due to a long religious holiday…

That’s what happened in July. Due to the Feast of Sacrifice, the number of working days in July was much less than in June.

It is necessary to make the calculation by equalizing the number of working days, that is, by excluding the months of June and July from the calendar effect. This calculation shows the performance in industrial production.

When we calculate in this way, we see that the monthly decrease is at the level of 7.6 percent.

With the seasonal adjustment…

We compared July and June, adjusted for calendar effects, and the decline fell to 7.6 percent.

There is one more purification that needs to be done; and that is to purify production from seasonal effects as well as calendar effects. By doing this, the rate of decline in production decreased to 6.2 percent.

All three ratios are correct

All three ratios are correct, depending on where and for what purpose you want to use them.

“I don’t look at the calendar effect, from how many refrigerators we came to, the important thing is that.“The production decreased by 20.9 percent.

“There was a long holiday in July, its impact must be taken into account” For those who say, the decrease in production is 7.6 percent.

“But let’s not forget the seasonal effect” For those who say, the rate of production decline is 6.2 percent. 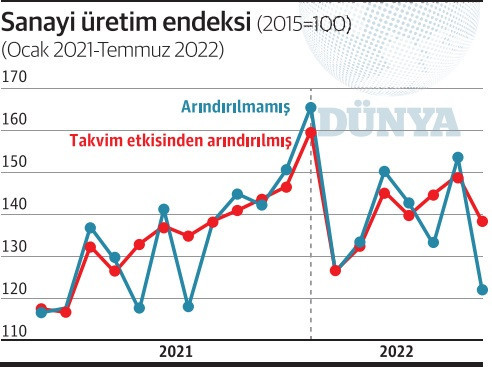 THE GOING DOESN’T GIVE MUCH TASTE!

TurkStat prefers to take the calendar adjusted index as the basis for the annual change in industrial production. Accordingly, the annual increase in July is only 2.4 percent. So, when we compare this 2.4 percent with the previous periods, what kind of picture emerges?

Industrial production declined on an annual basis in March, April, May and June of 2020 due to the pandemic. There is always an increase. But none of these increases were as low as 2.4 percent in July. In other words, the lowest increase in the last two years was experienced in July.

TurkStat uses seasonal and calendar adjusted index for monthly movement. Let’s look at that index. There was a 6.2 percent decrease in July compared to June. This is the most significant decrease since April 2020.

Therefore, whether we exclude the calendar effect or add seasonal adjustment to it, the course of industrial production is unpleasant.

Of course, it is an indicator that should be looked at how much industrial production increases or decreases in any given month. This is important in terms of seeing both the production level and the trend.

But there is another indicator, perhaps much more important. Let’s say that in the last month or in the last year, a lot of progress has been made in production or where has been achieved.

TURKSTAT announces data on industrial production by taking the year 2015 as a base. In other words, the average of 2015 is considered to be 100.

We have arrived in the middle of 2022, exactly seven years have passed. Let’s take the average of the first seven months of this year, the production level, that is the index, which was 100 in the 2015 average, but it was 137. We were able to increase industrial production by only 37 percent in seven years. In other words, the annual average increase is 4.6 percent.

If we compare the 2015 average with the level in July of this year, the annual average growth is much, much less.

Therefore, even if the industrial production fell a lot in July, even if it increased, it is necessary to look at the level of production, not just that.