Iraq the previous day, the capital was shaken by the clashes that broke out in Baghdad. Shiite cleric and political leader, one of the country’s influential figures Muqtada al-SadrFollowing the announcement of . It was reported that the clashes took place mainly between the Iraqi security forces and the pro-Iranian Hashd al-Shaabi militias acting together with the Saraya Selame (Peace Brigades) forces affiliated with the Sadr movement. According to the surrounding hospitals, the loss of life exceeded 30 and the number of injured exceeded 800 in clashes where heavy weapons, including mortars, were used.

While some countries evacuated their diplomatic missions from the region, many airlines canceled their flights to Baghdad. While Turkey, the European Union and the United Nations urged the parties to restrain themselves and stay away from violence, the Ministry of Foreign Affairs issued a travel warning to Iraq. The Iranian administration announced that all land borders with Iraq were closed and flights to Baghdad were cancelled. A nationwide curfew was declared on Monday evening.

Muqtada al-Sadr, who held a press conference at noon yesterday, called on his supporters to “Go home”. Saying that the protests should not continue because it has lost its peaceful character, Sadr said, “Shedding Iraqi blood is now prohibited. I want even the sit-in to end,” he said. Sadr apologized to the Iraqi people for the clashes and called on his supporters to return to their homes within an hour. While Sadr’s statements were effective, the curfew was lifted after the clashes subsided.

Iraq President Berhem Salih gave the green light to the early elections in his speech after the protesters withdrew from the streets. Stating that the election means a way out of the crisis, Salih said, “This also guarantees political and social stability and responds to the wishes of the Iraqi people.” In Iraq, which has not been able to form a government since the general elections in October 2021 and has been in the grip of a political crisis, there have been concerns about civil war among the Shiites for a while. Although the first party emerged in the general elections, the Sadr Movement, which refused to negotiate with other Shiite groups and could not obtain the necessary majority to form the government, demanded re-election and the abolition of the parliament. 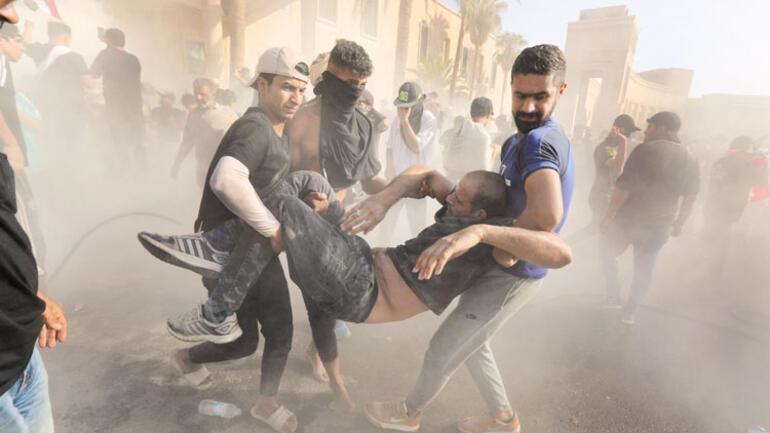 AGAINST TEHRAN’S INFLUENCE IN IRAQ

– Muqtada al-Sadr was born in Najaf in 1974, the son of Mohammed Sadiq al-Sadr, known as the “Great Ayatollah” in the Shiite world.

– Muqtada al-Sadr, who was not thought to be the heir of the Sadr family, which was influential on the Shiite population in Iraq, became the head of the family after his father and brothers were killed.

– Sadr, a prominent figure in Iraqi politics after the fall of Iraqi President Saddam Hussein, founded the Sadr Movement in 2003.

– Sadr Movement, which has the rhetoric of eliminating the influence of the USA and Iran in Iraqi politics, has succeeded in getting deputies to the parliament in every election since the 2009 elections.

– Although the first party came out of the ballot box in the October 2021 elections, the government could not be formed. Sadr announced that he was withdrawing from politics the previous day.