The European Union (EU) has turned to different parts of the world, especially Africa and the Middle East, in search of alternative resources to reduce its dependence on Russia.

Within the scope of the 6th sanction package approved in June, the European Union decided to end the import of crude oil from Russia by the end of the year, and the import of petroleum products as of the first 2 months of 2023.

This decision covers 90 percent of the EU’s current oil imports from Russia.

In the EU, which imported 48 billion euros worth of crude oil and 23 billion euros of refined petroleum products from Russia last year, a temporary exemption will be applied to the embargo decision for countries importing via pipeline. These countries will not be able to sell the oil they buy to other member countries or third parties.

Due to the difficulty due to its geographical location, Bulgaria will be able to import crude oil and oil products from Russia by sea until the end of 2024.

Croatia, on the other hand, will allow imports of vacuum gas necessary for the operation of its refinery until the end of 2023.

It is thought that it would be easier for the EU, which tried to reduce its fossil fuel imports from Russia after the start of the Russia-Ukraine War, to end its crude oil imports by the end of the year within the scope of the embargo.

According to the news in AA, experts predict that the EU will face the main difficulty in ending diesel imports from Russia.

According to the data shared by David Wech, Chief Economist of Vortexa, a real-time data tracking company, with AA correspondent, Europe imported 1.1 million barrels of crude oil per day from Russia by sea during the 1-21 August period. Most of these imports go to the Netherlands and Italy, while Bulgaria, Romania and Poland continue to import daily crude oil from Russia.

Other European countries have almost completely stopped purchasing crude oil from Russia by sea. Before the start of the war, the amount of crude oil imported by these countries by sea was at the level of 700 thousand barrels per day.

Russia’s share in European crude oil imports by sea decreased from 20 percent to 10 percent compared to the pre-war period, and from 40 percent to 25 percent in total oil imports. 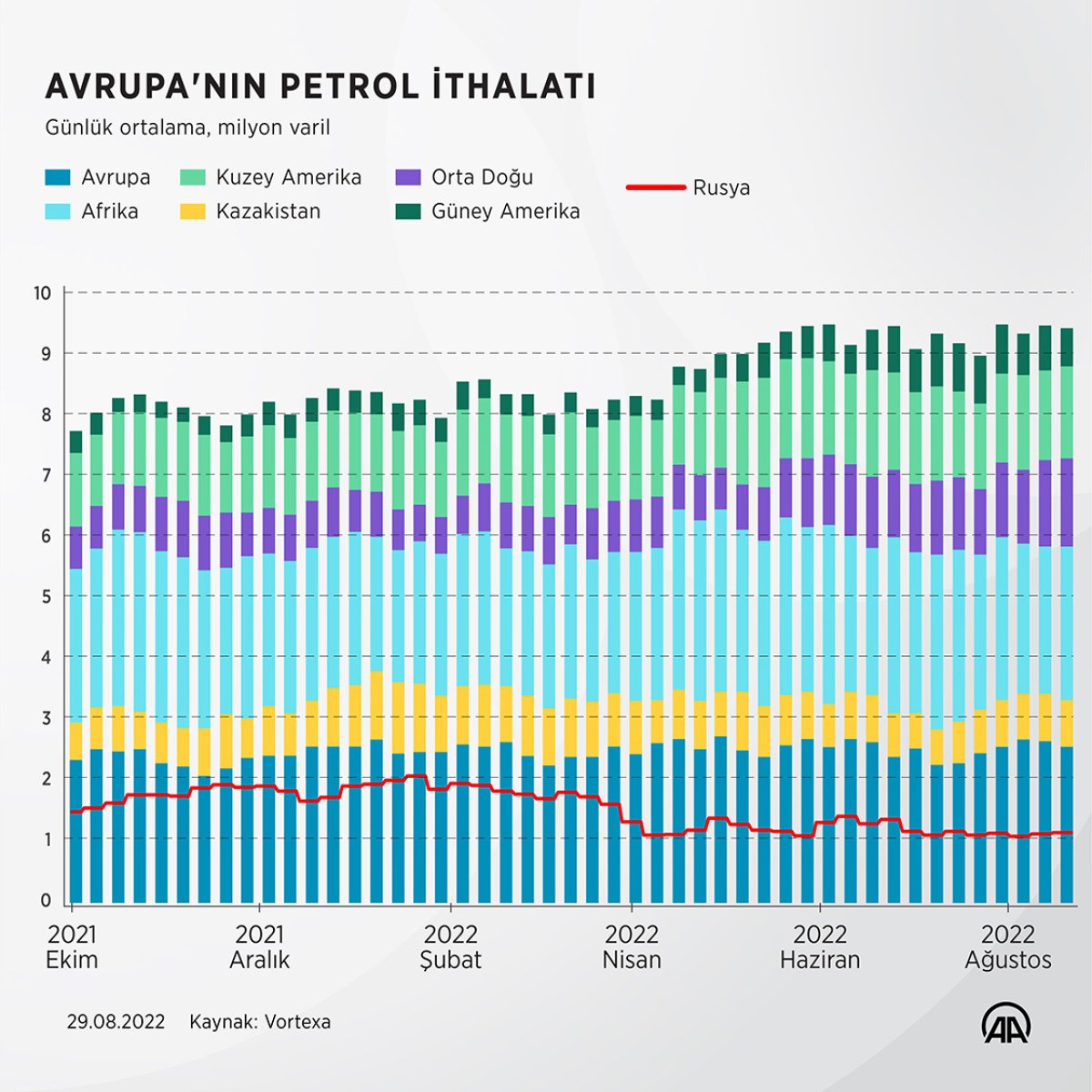 The EU has turned to different parts of the world, especially Africa and the Middle East, in search of alternative resources to reduce its dependence on Russia.

Crude oil imports from Russia, on the other hand, decreased by approximately 550 thousand barrels per day compared to the pre-war period, to 1.1 million per day.

Vortexa Chief Economist Wech pointed out that while the EU’s oil imports from Russia decreased, its dependence on Russian diesel increased.

Wech stated that it is relatively easy for the EU to reduce its dependence on Russia for crude oil when alternative suppliers are considered. “The situation is different in diesel imports. Russia’s share is 50 percent in diesel imported by the EU. It is also difficult to increase imports from other suppliers such as the USA, the Middle East and India. All these markets already produce and export diesel at record levels. The demand in these regions is also different. “It is limiting volumes to be sent to Europe. The only way for Europe to reduce its dependence on diesel in Russia may be for Russian diesel to go to Latin America, Africa and the Middle East, so that diesel supplies from other markets will be diverted to Europe.” made its assessment.

It remains to be seen how record-breaking diesel prices, increased demand as diesel is used as a substitute for natural gas, and constraints in the global refinery system will affect Europe’s determination to end diesel imports from Russia. 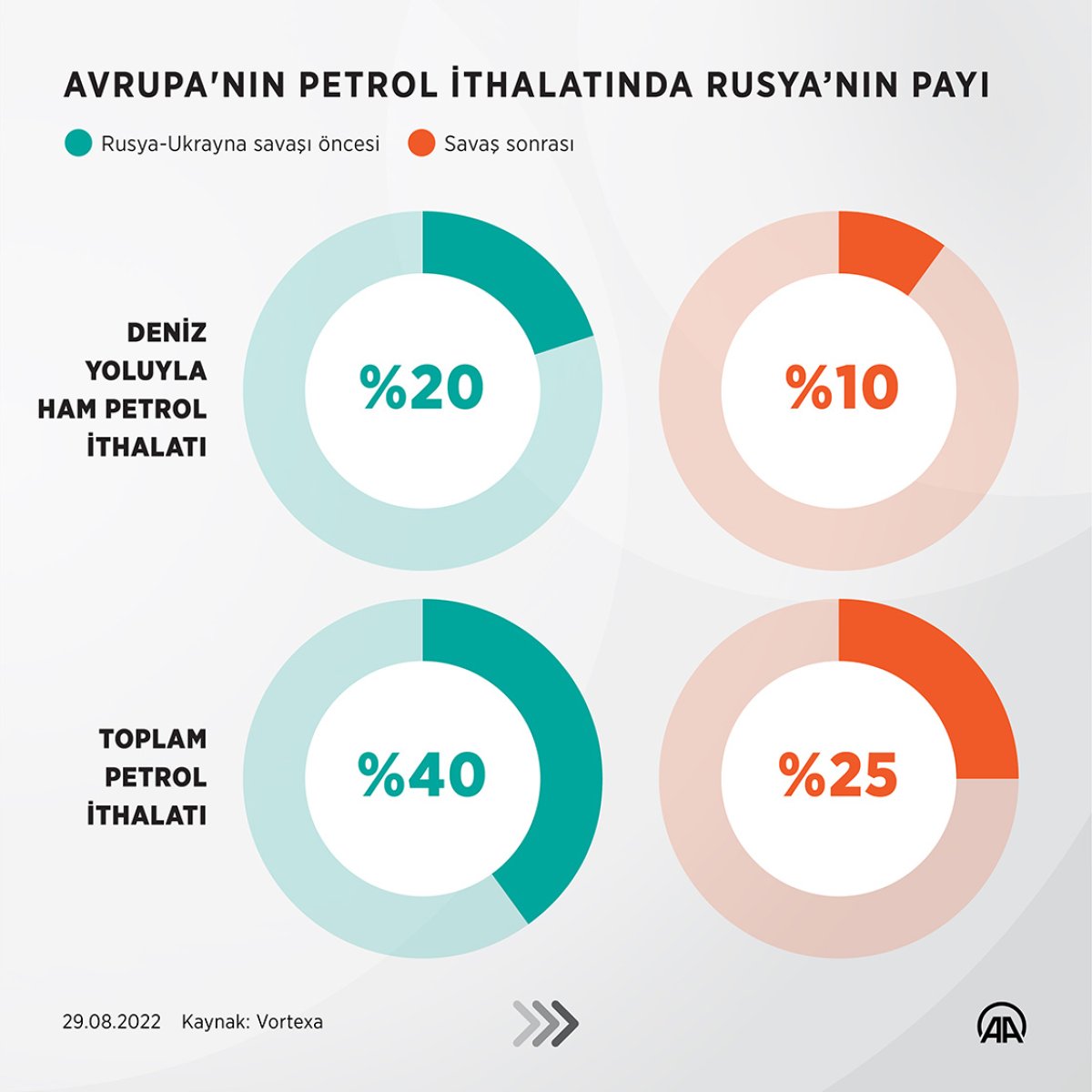 “The exit of Russian oil from the market will affect prices”

Neil Crosby, Senior Analyst at London-based oil data company OilX, said that in August, exports from Russia to OECD European countries increased on a monthly basis, but this amount was 500,000 barrels lower than in January.

“While Northwest European countries are slowly ditching Russian oil, there is currently an increase in imports from some Mediterranean countries. Most of the crude oil going by sea to OECD Europe, and especially northwestern European countries, will be cut off as agreed under the sanctions. Especially in the northern part of the Drujba line. “The embargo date on petroleum products comes a few months after crude oil, but for now there is no change in Europe’s determination. This means that trade is being reduced more and more. As the process to phase out Russian crude oil progresses, and the embargo date As we get closer, we may see oil price volatility in late 2022 and early 2023. As a result, a certain amount of Russian oil will leave the market, which will inevitably have an impact on prices.”

Crosby, on the other hand, stated that the EU changed some wording in the latest sanctions package to allow European companies to trade with Russian entities to transport oil to third countries, adding that this may allow more Russian oil to remain on the global market than previously anticipated. 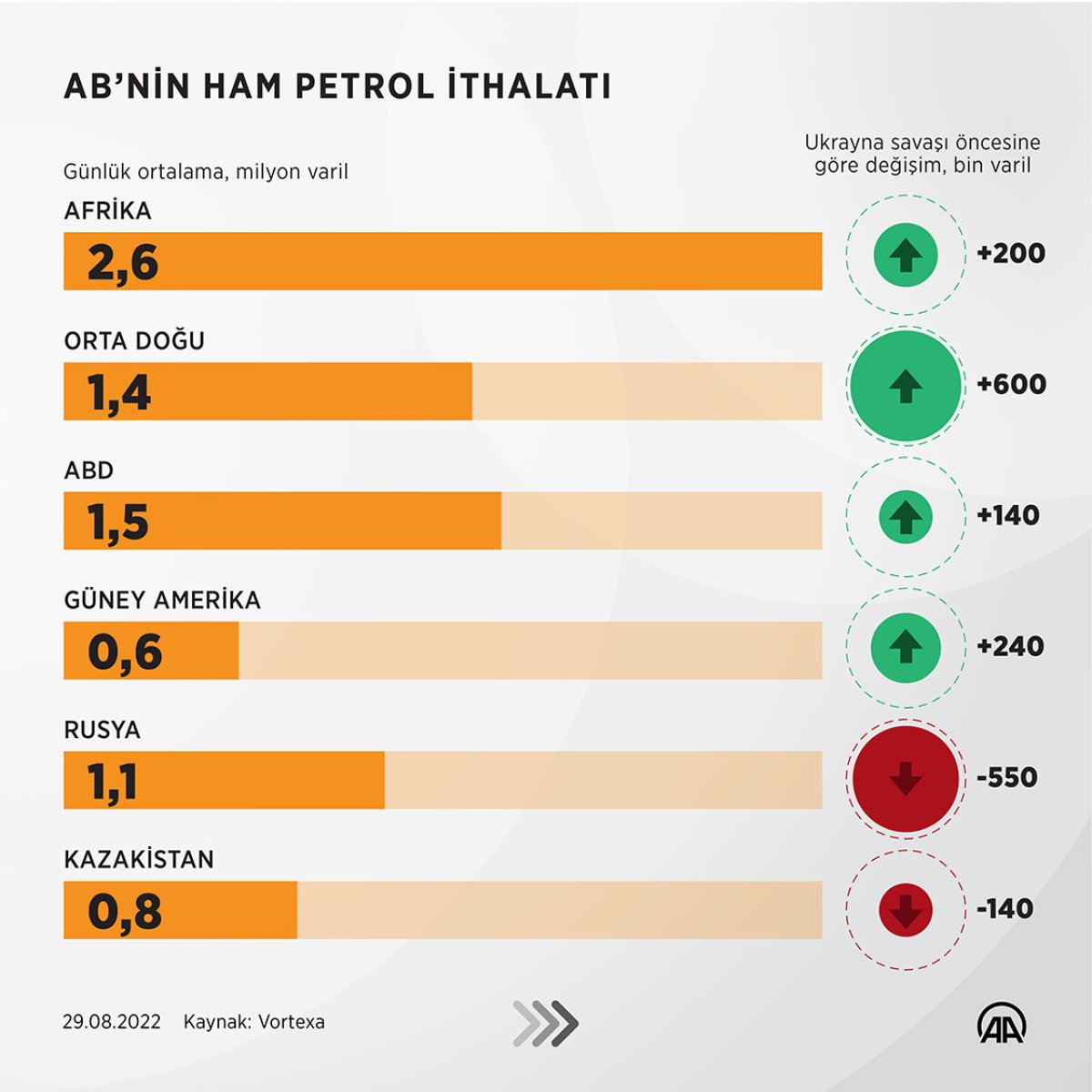