So what does it mean to have these documents in Biden’s office? What is the content of the documents? Will Biden be investigated like Trump? Here are the answers…

The President’s personal attorneys found about 10 “confidential stamped” documents on November 2, 2022, when they vacated Biden’s office from mid-2017 to early 2020, the White House said. It was also emphasized in the statement that the documents came out of a locked cabinet, that the White House Law Office informed the National Archives on the same day, and that the officials of the institution came and received the documents the next morning.

There was another development this morning. A source, whose name is kept confidential in terms of the authority of the investigation, announced that various documents were detected at a second point that has not yet been disclosed. However, it is not clear when these documents were found. The Department of Justice, the FBI and the White House have not yet made a statement regarding this hot development.

2) WHAT DOES THE CONFIDENTIAL STAMPED DOCUMENT MEAN?

Documents with a clear confidentiality mark on them or on the file cover contain sensitive information. Confidential information must be stored in sensitive fragmented information facilities known as SCIF for short. Special security measures are applied in these facilities. A locked cabinet in the Penn Biden office is not SCIF accepted.

Hillary Clinton’s use of her personal e-mail account connected to a private server during her time as secretary of state also caused a scandal. Because e-mails can also be considered confidential documents. However, as a result of the discussions, it was understood that there was no secret content in the correspondence.

3) ARE ALL CONFIDENTIAL DOCUMENTS THE SAME IMPORTANCE?

No it is not. According to a decree signed by Barack Obama in 2009, these documents are divided into various classes.

Documents with the lowest class “CONFIDENTIAL” stamp. They contain information that could “harm national security” if disclosed.

There is also Special Access Program (SAP) documentation. Only people who need to know can see them. To access these documents, it is necessary to be in the highest positions of the state.

Unnecessarily classified documents as classified is considered a major problem in the US bureaucracy. In fact, in 2010 Congress passed a law to combat this problem. However, no objective criteria have been set as to what is necessary and what is unnecessary.

4) WHAT CLASS ARE THE DOCUMENTS FROM BIDEN’S OFFICE?

We don’t know yet. CNN announced that the documents belong to the 2013-2016 period and consist of intelligence correspondence and information documents covering topics such as Ukraine, Iran and the UK. It was also emphasized that there were also non-confidential papers in the boxes in which the documents came out, and that the boxes should have been handed over to the National Archives years ago.

5) IS IT COMMON FOR CONFIDENTIAL DOCUMENTS TO COME FROM PERSONAL AREAS IN THIS WAY?

This is something that happens all too often, says attorney Mark Zaid, who defends those involved in security breaches. When someone retires or leaves work, he packs his stuff and leaves. Years later, secret documents come out of the warehouses. What happens next depends on how the person handles the documents.

Zaid said that in the majority of cases, the issue is resolved by administrative means, such as revoking security clearances. This solution is especially valid in cases where the situation is immediately reported to the competent authorities, the inspectors decide that no one has seen the documents, and the amount of documents is low.

Zaid said the situation is different for those who take away a lot of documents.

Doing this deliberately rather than inadvertently or accidentally, destroying confidential documents and lying about it are punished much more severely.

6) HOW DID BIDEN BEHAVE WITH THE DOCUMENTS?

Biden, who was in Mexico at the time of the disclosure, said he was “surprised to have government records taken to that office”. Biden also stated that his lawyers did not tell him the contents of the documents.

7) IS THIS DIFFERENT FROM HAVING A DOCUMENT AT TRUMP’S HOME?

In Trump’s case, the National Archives contacted the former president in May 2021 regarding the missing documents. Trump did not want to return the documents. When some of the boxes were sent to the Archives about a year ago, it was found that some of the documents were stamped confidential, at SAP level. Newspaper clippings, memorabilia and other items were found among the documents. Thereupon, an investigation was initiated as to whether there was any irregularity in the handling of confidential information.

The FBI, which issued a search warrant for Mar-a-Lago, announced that 184 documents were found in the boxes, 67 of them CONFIDENTIAL, 92 SECRET, and 25 TOP SECRET.

More than 100 documents were found in the raid in August. These, too, carried various levels of secrecy stamps. Some of the documents, most of them in a warehouse, came out of the current correspondence in the drawers in Trump’s office.

Zaid said, “If Trump had delivered the documents to the Archives at the first request, the issue would have been closed. The situation turned into a crime because Trump and his lawyers first stalled the authorities and then blocked them.”

The New York Times wrote that prosecutors asked the judge to punish Trump’s lawyers for failing to comply with subpoenas. 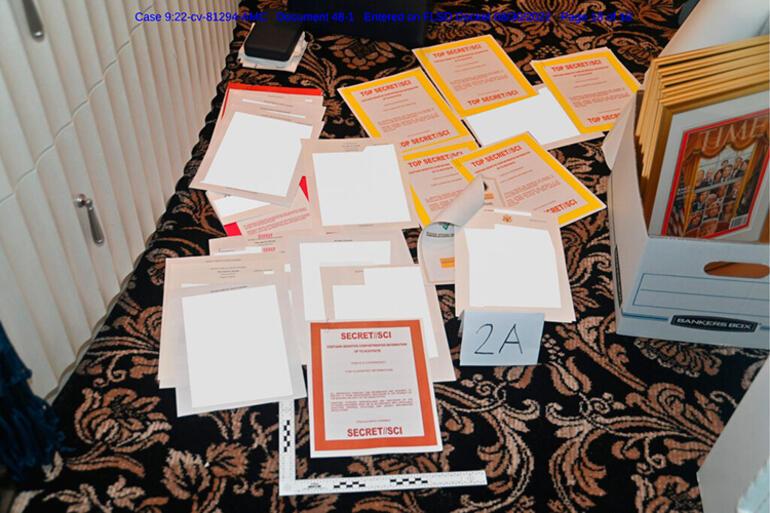 Some of the documents found in Mar-a-Lago

8) WHY WAS NO APPOINTMENT OF SPECIALLY AUTHORIZED PROSECUTOR IN THE BIDEN EVENT?

This question lies at the center of the debate in the US. Republicans argue that Biden is treated separately and Trump is treated differently. However, the basis of this argument is the assumption that both politicians act in the same way.

However, as we said above, Trump’s process is quite different from Biden’s. Especially in the context of cooperation with relevant institutions… However, the investigation is still in its early stages. In the coming period, Biden may also be investigated by a special prosecutor.

9) WHY DID THE WHITE HOUSE ANNOUNCE THE DOCUMENTS FOUND IN NOVEMBER 2 MONTHS AFTER?

This is another detail that Republicans are questioning. Party members claim that this delay is intentional and that the by-election is expected to end, but no evidence has been obtained yet.

The first stages of such investigations carried out by the Ministry of Justice are often hidden from the public. Returning to the Trump example, the Archives’ request date was May 2021. However, the public learned of the investigation only 9 months later, when the Archives announced that 15 boxes had been received from Trump.

“The Justice Department’s investigations are ongoing, so what we can say right now is limited. But we are determined to get this job done right. We will continue to share details at appropriate times and circumstances.”

10) WILL BIDEN’S PRIVATE PROPERTY BE SEARCHED?

If the prosecution sees the possibility that there may be documents stored in Biden’s home and other properties, a search warrant can be issued. In the Trump case, prosecutors revealed that the former President did not comply with a grand jury subpoena and return documents.

“How did these documents get from the vice president’s office to the Penn Biden Center?” is located.

The questions of how the documents were packaged, who carried them, and who had access to the documents after Penn Biden arrived are also critical. Many people who had served on Biden’s team during his vice presidency later worked for Penn Biden. These people are being questioned.

11) WAS BIDEN THE VICE PRESIDENT, WAS THE AUTHORITY TO CLASSIFY DOCUMENTS?

Yes there was. President Obama’s executive order gave this power to his deputy. Trump said that he lifted the confidentiality order on the documents in his possession. Biden also had the power to declassify documents he classified as confidential when he was vice president. But when this work is done correctly, there should be clear statements on the documents.